I have been cat-sitting my daughter's cat Tigger.  It has been fun.
We had cats when I was growing up, when in Calcutta, for a while, mainly because we were given two Siamese cats who had been spayed and house trained my an expat American couple, when they moved back to the US.  Otherwise, growing up and post my marriage, we have mainly been dog people.  Not to say I dislike cats.  I am not a cat hater.   In fact, as I tell people, I am a mammal person.  I am not averse to trying out any mammal that can be tamed except maybe the big shrew like rats we get here sometimes.  I have looked after a squirrel, sundry dogs, cats, goats and helped in looking after cows.  I am pretty sure I would not mind a monkey, I talk to the mongooses I see occasionally around here!
Anyway it was fun cat -sitting Tigger, who is a most affectionate cat.  The first thing in the morning, when he sees me, (I can't have him sleep with me as I am pretty allergic to cat hair) is to run and then lie flat in front of me for a tummy rub and general stroking.  He's already purring by the time he lies near me.  He then waits for me to get my coffee and sit down, so that he gets more petting.
I find this quite surprising because most cats don't come asking for petting like the dogs do.  He has 2 stuffed teddys, one of whom he especially loves and it is the greatest fun to see him playing with the teddy, kissing the teddy, rough housing with it and then hugging it.
My dogs are not let inside at all now, since he is in the house, and they are quite jealous, but also interested in this new character.  He sits and watches them from inside the house.  I think he would like to make friends, but they don't seem to take very kindly to that idea.
Anyway, tomorrow we take him back to my daughter's place.  I will miss him I know.  But then I do have my doggies. 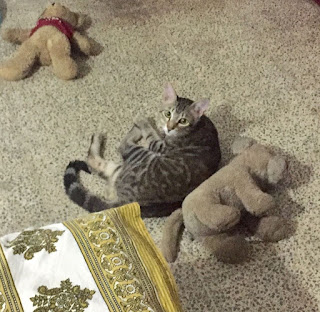 Posted by hillgrandmom at 20:30 No comments: Links to this post

My 46th wedding anniversary went by recently; my grandson will turn a teenager this year(!!) and it will be five years since my son passed away.  Life moves on inexorably.  There is no point looking back.  Forward is the only way.

I am hoping I can travel this year.  My husband & I have been talking about trips around India for a while.  Hopefully we can do at least a couple this year.

I do not make new year resolutions, for quite a while now.  After all, the resolve for a change can be anytime.  But here's hoping I can make changes in me for the better this year.

Once more, wishing everyone a good, peaceful, year.

Posted by hillgrandmom at 21:38 No comments: Links to this post