Some more pictures from around the hill, this time of flowers. 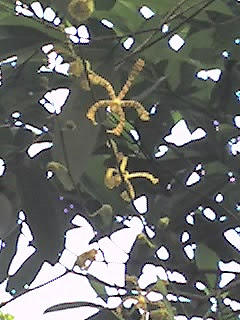 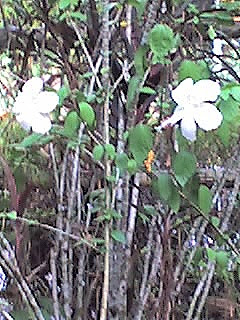 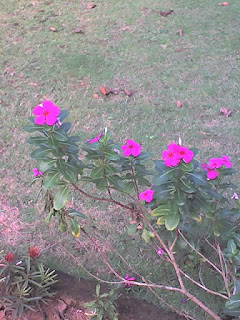 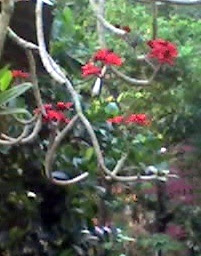 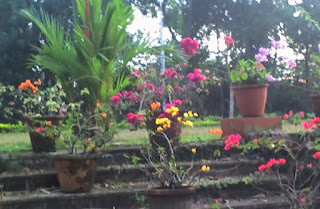 The 2nd picture is of white hibiscus--and it's brilliantly white.
The colour of the impatiens in my sister-in-law's garden was too inviting to pass up:)
Posted by hillgrandmom at 11:34 11 comments: Links to this post

These are some random pictures around our hill. 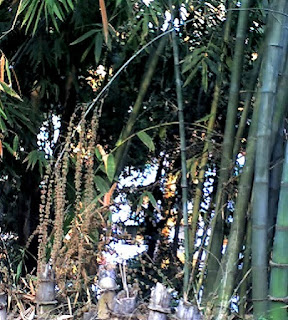 This is the bamboo in bloom. You may have heard that the bamboo flowers rarely, once in 12 to 36 years. Well this is 36 years, because I don't remember it flowering before and I've been married that long. It was planted by my mother-in-law. Apparently the bamboo will die after that and then regrow from the same spot. Waiting to see what happens. 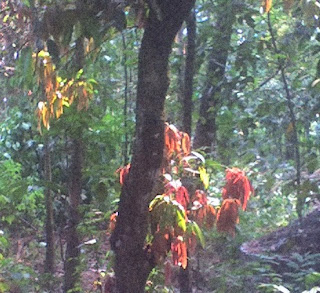 This shows the tender young leaves of a mango tree. We've had the requisite 2 or 3 showers. So the mango trees are all putting out new leaves and flowers. These red leaves turn green in about a week. 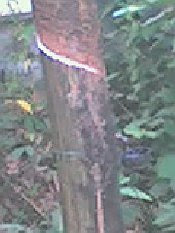 This is of course a tapped rubber tree. Since I took this pic with my phone and through my window, it's not too clear. If you look carefully, you can see the black plastic container kept to collect the rubber.
Posted by hillgrandmom at 16:56 2 comments: Links to this post

Thank you so much all my blog friends. Just the fact of ventilating, combined with all your support has really made me feel so much better. It's hot and muggy and tiring here, but I'm certainly not dispirited. Thank you all once again from the bottom of my heart.
Posted by hillgrandmom at 22:19 1 comment: Links to this post

My last post about feeling dead inside got me a letter from blog friend Sarah. In her letter she says its ok to feel unhappy too (which then made me cry some more). But it also made me think. For me personally, I have always found it rather hard to acknowledge and accept negative feelings--like anger and sadness--as ok.
Way back when my children were growing up, when my elder son started having physical problems and doctor's visits were the norm for so many holidays for us, I learned to damp down sad thoughts, worries, etc because I felt I had to be strong for him. I didn't want my children to see me have a meltdown--the one on whom they relied to keep their world stable. For me helping my son to become an independent, well-rounded personality, in spite of his disability, was very important and somehow being swamped with sadness always made it difficult for me to treat him like any other child. Besides, I feel children are uncanny in being able to pick up feelings from their parents. So I learned to keep out the emotions and only stay in the reality of the moment. As a good friend used to say, "You swallow everything, go to the toilet and pull the flush"[:)]
Along with my son's problems, we had to deal with the illness and subsequent passing of first a younger sister-in-law, then my father-in-law and then my mother-in-law, all due to different forms of malignancies. In all this I felt I had to be the strong one (and I guess to some extent I am accepted as the strong one in our large extended family), which required rigid control of my emotions. Now, after having been the strong one in ever so long, I find it difficult to lean on anyone, to allow myself to be vulnerable to the people around me. I can only let it out in the written word. So all my blog friends, please bear with me when I angst, because you are the friends with whom I feel I don't have to be the strong one.
Posted by hillgrandmom at 16:10 6 comments: Links to this post

I feel tired and dispirited. I know that I have so many things to be thankful for. But somehow I can't drive away the feelings. I realise I am just drifting along, doing nothing really worthwhile, and nothing that makes me feel like the day is an adventure. I flog myself to keep going, to stay in the moment so that I can carry on doing what I must do. The lack of feeling inside sweeps through me now and then, though I try hard to keep it at bay. So often I wonder why I'm alive. Then the analytical, intellectual part of me takes over--the one who learnt all the counselling and has read so much about all that--and tells myself about the worthwhile things I'm doing. But it still doesn't cut into the heart of me. Of course I must be thankful that the deadness inside of me is no longer as bad as it used to be some years back. But when the feeling sweeps through once in a while, it just makes me want to be not alive any more.
Nobody really writes about things like this on their blog. I also realise that my blog is boring because I feel dead inside and so cannot bring any passion into my writing. Maybe I shouldn't blog again till I can feel some passion.
Posted by hillgrandmom at 21:24 5 comments: Links to this post

Among other things, what kept me busy over the weekend!
Posted by hillgrandmom at 17:32 2 comments: Links to this post

It's been one year since my mother passed away. People make comments about how fast one year has gone. As I type this post, the memory of last year comes back. I know that she had a full life and was really waiting to go. So I try not to miss her. This last week or so I once woke with a start because I thought she called me. We will be having a memorial service for her on Saturday morning.
Posted by hillgrandmom at 21:41 8 comments: Links to this post

It's the time of Lent for the Christian world. Here, in Kerala, as a member of an Oriental Orthodox Church, this Lent is the most important one and is observed for 7 weeks. Lent for us started on the 4th of this month.

I have decided to observe Lent this year, as I have a couple of times before. My sisters-in-law all observe this Lent, as do occasionally the brothers-in-law (not my husband though). During these 7 weeks (actually 48 days as the fast begins on a Monday and ends on Easter Sunday) those who observe the Lent give up meat, fish, alcohol and sometimes eggs & milk. I have decided to give up meat and fish and try not to eat eggs. My sisters will mostly not eat eggs too, which therefore means cakes and custards etc. I remember my husband's grandmother giving up meat, fish, eggs, milk & milk products too, which I know used to be a real sacrifice for her. She used to observe all the Lents in the Church calendar. So much so, the rest of the year, she used to refuse to eat any vegetables, saying she had eaten enough during the different Lenten seasons to last her for the rest of the year:)

During this period of Lent our community--on the whole--becomes very subdued, as this Lent is observed by many Christians of other denominations too. There are no weddings, as weddings are not permitted during Lent and rarely parties, as most of our men are ardent fans of meat, fish and alcohol and a party without all 3 is unbearably dull! Add to that, it is examination time in the school year around this time. Many people take this time to diet stringently too; after all it's much easier with so few social events.

It's during this Lent particularly that all kinds of interesting vegetarian food items appear in the shops, which you wouldn't see normally. They don't seem to appear so much during the 24 day pre-Christmas Lent, probably because far fewer people observe that Lent.

In the Orthodox Calendar there are many Lents of different lengths, this being the longest. I did try to find a site to link to which would explain them, but couldn't come up with a comprehensive site.

All the other women in the family (my husband's family) are all more practising and stauncher Christians than I am. On of the younger ones told me that apparently our Church has a service everyday from around 12 to 12.30 p.m. (about which I knew nothing though born into this Church). One was traditionally supposed to have the first meal of the day only after this service was over. During this service of half and hour, one is supposed to genuflect 70 times. She says she goes most days and genuflects the 70 times. I have to confess that I doubt I would be able to genuflect even twice. She also told me that there is a service on the morning of the Monday that Lent begins. She was telling me that the priest preached a sermon that this day one is supposed to forgive all the hurts anyone might have done to us; that there is no point observing Lent with anger and lack of forgiveness in our hearts. I thought that was a wonderful point. I must say it's interesting to learn things I didn't know, about the Church I have technically been a part of for the past 56 years.

So to all my blog friends, my special prayers for you all this Lenten season. May you all have time to meditate and to get rid of some hurts in your heart.
Posted by hillgrandmom at 19:28 5 comments: Links to this post

Hiphop Grandmom had asked me to write about beliefs that I held when I was younger that have changed with time. Believe me HHG, I’ve been giving a great deal of thought to that. Well here are beliefs which have changed.

Most of my other beliefs I still hold to, like:

I hope this is what you had expected HHG. I would like to hear what Eve at Eve’s Lungs has to say to this as well as Geets.

Posted by hillgrandmom at 18:36 8 comments: Links to this post