One of my dogs died on Monday morning. It was upsetting.

Allie was a Doberman and she was 4 years old. She was actually my daughter’s dog. But when my daughter moved to and was unable to get a place where a dog was allowed, she asked me to keep one of her 2 dogs. So I took Allie, firstly because she was female. Besides, she had already been spayed & also because I felt she was very sensitive & would be very unhappy in a new situation, whereas she already knew me & this place. She came to me in 2003, when she was a pup of around 10 months. Allie very soon became my dog. My sons used to call her my tail. Although a Doberman, she loved to be petted and would wait for you to sit down to place her head strategically on your lap. She was very much my dog. But when my daughter or her husband came, she was ecstatic. After all it was they who had brought her up from the time she was 3 weeks old, till the time she was 10 months! So much so I think she was just a bit jealous of their baby.

This May Allie had turned 4. She had mellowed and was no longer the jumpy puppy she was when she came to us.

I really don’t know what exactly happened. She seemed a bit quiet, but I thought that was because she had finally quietened down. Suddenly she started throwing up. We took her to the hospital. One vet said it was distemper, but another said that she didn’t have enough signs. All I know is she was really ill, and seemed to have some internal bleeding. The doctor at the vet hospital treated her for distemper and gave her a dextrose drip for dehydration, as she had been throwing up a lot. But it was of no use. She had terrible convulsions in between, which was agony to watch. But the saddest was hearing her crying through her sedated sleep. Anyway, she was out of her misery early Monday morning. We buried out among the trees. It will take a while to stop missing her.

Posted by hillgrandmom at 16:51 9 comments: Links to this post 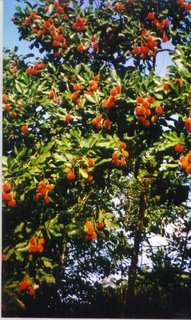 It's a lovely Sunday here today. It's one of those breezy, sunshiny days that come during the South-West Monsoon. I look out of the window and everywhere I look is lush, new-washed green. There is an abundance of butterflies of various hues and sizes. My rambutan tree is full of fruit, slowly ripening and it looks beautiful covered in red fruit as in the picture. I can hear the chittering of squirrels and the twittering of birds. I'm listening to Latin jazz on Internet Radio, with a background of the breeze in the trees.
Lovely, relaxing Sunday!
Posted by hillgrandmom at 16:45 6 comments: Links to this post 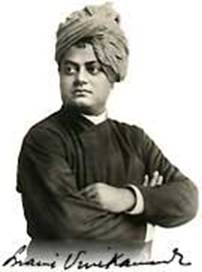 
- Swami Vivekananda
So well put! So wanted to share it with everyone.
Posted by hillgrandmom at 16:26 2 comments: Links to this post