Haven't posted in a while 'cos I was travelling. But had saved this earlier and thought this blogthing was really neat. So, are you an optimist or a pessimist?

Are You An Optimist or Pessimist?
Posted by hillgrandmom at 20:49 8 comments: Links to this post

The book titles in bold are those I've read, those in italics are those I want to read and the others are those I have no idea about. As you can see, I'm not so great on Indian authors!

Posted by hillgrandmom at 20:29 9 comments: Links to this post

Email ThisBlogThis!Share to TwitterShare to FacebookShare to Pinterest
Labels: tags

I feel a bit low this evening. My younger brother left today. He lives in the US. He was here for around 3 weeks. I haven't spend so much time with him for a long while.
We are the closest in age in our family and so, when we were kids, were very close--fighting all the time, but sharing a great deal too. But as we grew up and started families and began living on different continents, we sort of drifted apart. We were each of us busy with our own lives. When he visited India, he would spend with my parents where they lived earlier--not in this town and I just went home for a short visit when he--or other family--were there. Besides they never had long vacations and would be at home maybe only for about 10days.
But this time things were somehow different. He was the only one who hadn't been recently to visit with my mother--after my father died. (He had had a major surgery and was not in a position to travel such a long distance.) He had planned this trip with much anticipation, way back last December and had told my mother he would be with her for my father's memorial service and for her 90th birthday, which would have been May 17th. He had told her that we would celebrate it with a party. But it was all not to be (my mum died in Feb). He was really sad that he hadn't got to see her recently.
Anyway, since we were both free (school vacations for me) we decided to go visit the last few of my mother's family and so took the trip to Bangalore. Just the 2 of us went and so we got to spend a lot of time with each other, although we met up with various family members there. We talked a lot and so I got to hear his dreams for his future, for himself and his wife. These are things it's difficult to share just through letter/e-mails when you hardly get to see each other. This time together brought us closer together after such a long while.
I love you brother. Here's wishing you safe journey and all the very best.
Posted by hillgrandmom at 19:26 4 comments: Links to this post

Email ThisBlogThis!Share to TwitterShare to FacebookShare to Pinterest
Labels: family

This one from blogthings I couldn't resist :)

How Normal Are You?
Posted by hillgrandmom at 19:24 4 comments: Links to this post

Email ThisBlogThis!Share to TwitterShare to FacebookShare to Pinterest
Labels: random
Have not had easy access to the computer for the last week. How I was dying to get to a computer--with Internet. Only comp I got to check was on a dial-up, which was so slow!!
Well, was once more in a big city. Was in Bengalooru. The traffic is mad and it's so hot there now, it felt worse than it does here in Kerala, as compared to what it used to be even 10 years ago. All the old Bangalorians feel mad as hell and so so nostalgic for the old days! I'm not going to add to all the numerous comments already being made on what Bangalore needs!
Just wanted to say that I had my fill of urbanity(wrong usage i know, but seems to fit), though had some fun anyway, going to Corner House for dessert and wandering around Forum all by myself, for around an hour. Also got to see that Metro place--warehouse shopping is what its called is it?
But really glad to be back to breeze and quiet and fast Internet connection--the last very important.
Posted by hillgrandmom at 18:14 7 comments: Links to this post

Email ThisBlogThis!Share to TwitterShare to FacebookShare to Pinterest
Labels: me

On Sunday, husband & I had taken my brother and wife to Fort Kochi. We dropped my sis-in-law off at the airport and went back to Fort Kochi to stay the night at the Ballard Bungalow. Lovely place!
It was a relaxed weekend although rather warm. Fort Kochi really is a nice place to hangout in.
Tomorrow my brother and I are going to Bangalore and will probably be back only by 15th evening or 16th morning. It's unlikely that I will be able to get time to blog while I'm travelling. So any blogging will be only after I get back.
Posted by hillgrandmom at 09:06 4 comments: Links to this post

I just went for a typical Kerala Hindu wedding feast, with all the various curries and 2 payasams(sweet dish) and I feel like a caterpillar about to burst/moult! Well, luckily since it's all vegetarian and not too much saturated fat, I'll feel ok soon.
Yesterday's post had the picture of a woodpecker--like one of three that were outside my window. Here are 2 more pictures of what lies outside my window. one is a tapped rubber tree (the clearest I could get from the window with my phone) and the other is of the lilies which are in bloom now that there are the occasional rain showers. 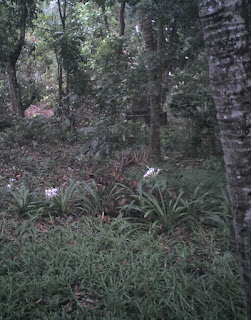 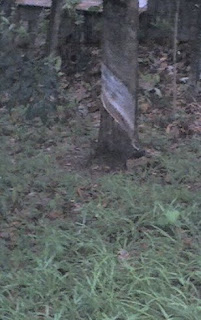 Posted by hillgrandmom at 15:23 4 comments: Links to this post

Email ThisBlogThis!Share to TwitterShare to FacebookShare to Pinterest
Labels: outside my window, stuff

There were 3, repeat 3, wood peckers outside my window a little while back. But unfortunately my camera phone wasn't up to capturing a pic because firstly they were not too near, plus it's a cloudy day. So here's a picture from Answers.com. They are beautiful birds, with a loud raucous cry. The 3 of them were battling for space on the same side of an old coconut tree with a chipmunk. I can still hear them outside.

Posted by hillgrandmom at 12:42 2 comments: Links to this post

I just took a look at my archives and found that this is my 112th post and that I've been posting for around 13 months! Didn't really even think about it till today.
Posted by hillgrandmom at 16:54 5 comments: Links to this post

Email ThisBlogThis!Share to TwitterShare to FacebookShare to Pinterest
Labels: the blog

more on being an urbanite

After all the comments I got, I thought I had enough to say for a mini post :)

I was born and lived in cities mostly, till a year after my marriage, when I came to live here. What I missed most--and which on some days even now I miss--is the anonymity a big city has. Then there are all the varied cultural events that take place; naturally in a metropolis, the variety of happenings means that there's something for everyone, if not often, at least once in 3 months say.

But to that I have to add that I am truly glad that I got to bring up my children here, with so much space around and with family all around and the really remarkable school they were able to go to. I think that on the whole my children have happy memories of their growing up and all their vacations, with so many cousins to play with and so much safe open space to play in. City life, when I grew up, is surely different from today's urban living. So all said and done, it's nice to be able to look out at trees and hear bird calls. But for me, an occasional visit to a city is really enjoyable.