Check this post out over at family blog.
Posted by hillgrandmom at 18:12 4 comments: Links to this post 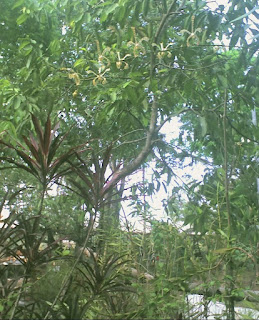 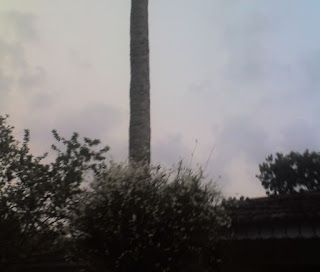 Ok, here are two pictures taken with my phone, both of orchids. One was taken in the afternoon, the other was taken in the evening. The first is of one of my 2 scorpion orchids. I'm trying to show off here, cos otherwise I promise you I am not a fancy gardener. It's trees and easy growing plants for me strictly.
The other picture, though not very clear, is of a bunch of lovely white tiny orchids, called pigeon orchids. They are at the next door house and on a coconut tree. The amazing thing is that darn thing blooms every time there is a function there! So this time was 'cos there was a birthday party there the day before.
Posted by hillgrandmom at 18:56 5 comments: Links to this post

Email ThisBlogThis!Share to TwitterShare to FacebookShare to Pinterest
Labels: nature

As I had written after my father's death last year, 40 days after a person's demise is very important in the Orthodox Christian tradition.
The official end of the mourning period for my mother was on 24th. Somehow getting through the 23rd and 24th were very difficult for me. It is such a relief that that's over. I know I will miss my mother, but somehow my heart feels lighter. May her soul rest in peace.

Posted by hillgrandmom at 21:12 4 comments: Links to this post

This is the first pic I'm putting up that i took. As you can see I'm only just getting the hang of it. It's a terrible picture. But then I guess that's the way to learn :)
That is the jackfruit tree outside my window. It's jackfruit time. So last week huge quantities of chips from raw jackfruit were made--unfortunately all finished already!! Also we made ripe jackfruit preserve--chakka velaychatha--with jaggery and coconut and then of course there was jackfruit seeds and raw mango curry and seeds sauteed. As you can see, definitely jackfruit season!
I put a link to the wikipedia page so that you can see a better picture of a jackfruit tree.
Posted by hillgrandmom at 23:06 14 comments: Links to this post

Email ThisBlogThis!Share to TwitterShare to FacebookShare to Pinterest
Labels: me

A meme I decided to do

I saw this over at Eve's Lungs and liked it. Here is a book tag.


1. The Da Vinci Code (Dan Brown) – I’d read ‘Holy Blood, Holy Grail’, many years before & so thought I’d check it out.
2. Pride and Prejudice (Jane Austen) – I love Jane Austen
3. To Kill a Mockingbird (Harper Lee) – My mother kept urging me to read this book after seeing the movie, way, way, back.. Finally read it much later
4. Gone With the Wind (Margaret Mitchell) Read over a long while back – partly during the time I was being given drip for my daughter’s birth—seriosly!!
5. The Lord of the Rings: Return of the King (Tolkien)
6. The Lord of the Rings: Fellowship of the Ring (Tolkien)
7. The Lord of the Rings: (Tolkien) Am a total fan of the series!!
8. Anne of Green Gables (L.M. Montgomery). I’ve read the whole series and am planning on buying them all one at a time now they’re easily available here.
9. Outlander (Diana Gabaldon)
10. A Fine Balance (Rohinton Mistry)
11. Harry Potter and the Goblet of Fire (Rowling)
12. Angels and Demons (Dan Brown) -
13. Harry Potter and the Order of the (Rowling)
14. A Prayer for Owen Meany (John Irving) -
15. Memoirs of a Geisha (Arthur Golden)
16. Harry Potter and the Philosopher’s Stone (Rowling)
17. Fall on Your Knees (Ann-Marie MacDonald)
18. The Stand (Stephen King)
19. Harry Potter and the Prisoner of Azkaban (Rowling)
20. Jane Eyre (Charlotte Bronte). I was lucky to have access to many of Charlotte Bronte’s novels while in school. Read many of them.
21. The Hobbit (Tolkien) -
22. The Catcher in the (J.D. Salinger)
23. Little Women (Louisa May Alcott) “Oh - easily one of my favourites” I second that. Again I have the series.
24. The Lovely Bones (Alice Sebold)
25. Life of Pi (Yann Martel)
26. The Hitchhiker’s Guide to the Galaxy (Douglas Adams) My son has the series all together and I read that. My favourite was ‘Goodbye and thank you for the Fish’.
27. (Emily Bronte) – Not really a favourite—too dark, but a must read
28. The Lion, The Witch and the Wardrobe (C. S. Lewis) Can you believe it, I read it only recently! Loved it.
29. East of Eden (John Steinbeck) A good read. Have read it more than once.
30. Tuesdays with Morrie(Mitch Albom) Have been wanting to read it for a while.
31. Dune (Frank Herbert) - Must read it again
32. The Notebook (Nicholas Sparks)
33. Atlas Shrugged (Ayn Rand) –
34. 1984 (Orwell) - Classic science fiction.
35. The Mists of Avalon (Marion Zimmer Bradley)
36. The Pillars of the Earth (Ken Follett)
37. The Power of One (Bryce Courtenay)
38. I Know This Much is True (Wally Lamb)
39. The Red Tent (Anita Diamant)
40. The Alchemist (Paulo Coelho)
41. The Clan of the Cave Bear (Jean M. Auel) - 42. The Kite Runner (Khaled Hosseini). Wouldn’t want to read it again though.
43. Confessions of a Shopaholic (Sophie Kinsella)
44. The Five People You Meet In Heaven (Mitch Albom)
45. Bible – Naturally!
46. Anna Karenina (Tolstoy)
47. The Count of Monte Cristo (Alexandre Dumas)
48. Angela’s Ashes (Frank McCourt) -
49. The Grapes of Wrath (John Steinbeck) Have read it in bits.
50. She’s Come Undone (Wally Lamb)
51. The Poisonwood Bible (Barbara Kingsolver)
52. A Tale of Two Cities (Dickens)
53. Ender’s Game (Orson Scott Card)
54. Great Expectations (Dickens)
55. The Great Gatsby (Fitzgerald)
56. The Stone Angel (Margaret Laurence)
57. Harry Potter and the Chamber of Secrets (Rowling) - .
58. The Thorn Birds (Colleen McCullough)
59. The Handmaid’s Tale (Margaret Atwood)
60. The Time Traveler’s Wife (Audrew Niffenegger)
61. Crime and Punishment (Fyodor Dostoyevsky)
62. The Fountainhead (Ayn Rand) – That was the in thing when I was in college!
63. War and Peace (Tolstoy)
64. Interview With The Vampire (Anne Rice)
65. Fifth Business (Robertson Davis)
66. One Hundred Years Of Solitude (Gabriel Garcia Marquez)
67. The Sisterhood of the Traveling Pants (Ann Brashares)
68. Catch-22 (Joseph Heller) - YES !
69. Les Miserables (Hugo)
70. The Little Prince (Antoine de Saint-Exupery)
71. Bridget Jones’ Diary (Fielding)
72. Love in the Time of Cholera (Marquez)
73. Shogun (James Clavell) -
74. The English Patient (Michael Ondaatje)
75. The (Frances Hodgson Burnett)
76. The Summer Tree (Guy Gavriel Kay)
77. A Tree Grows in (Betty Smith)
78. The World According To Garp (John Irving) -
79. The Diviners (Margaret Laurence)
80. ’s Web (E.B. White)
81. Not Wanted On The Voyage (Timothy Findley)
82. Of Mice And Men (Steinbeck)
83. Rebecca (Daphne DuMaurier) and several more of hers.
84. Wizard’s First Rule
85. Emma (Jane Austen)
86. Watership Down (Richard Adams) - I enjoyed it thoroughly.
87. Brave New World (Aldous Huxley)
88. The Stone Diaries (Carol Shields)
89. Blindness (Jose Saramago)
90. Kane and Abel (Jeffrey Archer)
91. In The Skin Of A Lion (Ondaatje)
92. Lord of the Flies (Golding) because my children had it as a text. I did not like it. They did.
93. The Good Earth (Pearl S. Buck)
94. The Secret Life of Bees (Sue Monk Kidd) I loved it! A beautiful book.
95. The Bourne Identity (Robert Ludlum) Not into Ludlum.
96. The Outsiders (S.E. Hinton)
97. White Oleander (Janet Fitch)
98. A Woman of Substance (Barbara Taylor Bradford)
99. The Celestine Prophecy (James Redfield) -
100. Ulysses (James Joyce)

All welcome to do this tag
Posted by hillgrandmom at 18:24 3 comments: Links to this post

Well, I'm feeling much better. The good cry helped I guess.
Also,I had what is called pyelonephritis. After reading whatever I could about it on the Net, I realised there was no point in trying to be strong woman and just take it easy. Incidentally it also explained my intense weepiness!
And think of it, I lost almost 3 kgs!!
Posted by hillgrandmom at 13:02 2 comments: Links to this post

Email ThisBlogThis!Share to TwitterShare to FacebookShare to Pinterest
Labels: myself

I wrote the last post this afternoon, when I was in a better mood. But the fact is that I seem to feel lousy. I can't seem to stop crying! I've always been the one who is strong for everyone else as my family--extended too--will testify. But today I just don't seem to be able to pull myself up. I can usually use my logic, or use escape tactics--playing card games or singing, or listening to music--but today i seem to have no reserves to delve into. Whatever I do, I still end up crying after a bit. I know it might all be part of missing my mother--after all she lived next door to me for the last six and a half years--but I know that if she was here I wouldn't be leaning on her. The only thing is that I know that if she was I would be able to put myself aside easily and carry on. Maybe it's too many days of being ill, which seems to have drained me totally. Even to write a post like this is soooo unlike me. But I guess I'm writing this post because I so want my internet friends to give me a boost.
Posted by hillgrandmom at 20:03 13 comments: Links to this post

Email ThisBlogThis!Share to TwitterShare to FacebookShare to Pinterest
Labels: myself
I've been out of action for a few days because I went around with an infection which got out of hand I guess. For three days I was completely laid up and feeling really low. When i took a specific antipyretic though, I got around to do what I needed to do. Guess it was everything catching up with me. Feeling much more positive now.
I wanted to put up a pic of the dog I do have still with me--my 10 year old Dobe. But as usual I had to find a picture from the Net as I don't have any scanned pictures of her to upload. So here is a picture (which too came from Wikipedia) which looks remarkably like her. Wanted to add that according to Wikipedia, the Dobermann is really a very lovable breed, depending on upbringing of course!! Mine really is very loveable and she particularly loves kids. I guess it's also cos she's been lucky--she's never had kids being mean to her. 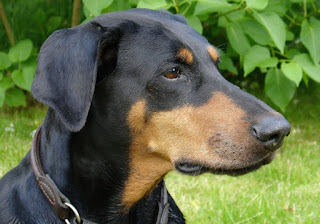 It's been over 2 weeks since my mother died. As long as I'm in my own home it's easier. But when i go to her flat, her absence hits me so hard. Well, anyway, 'm pretty sure she's happy now, without all the aches and pains.

In the middle of the pain of my mother's leaving my life in this abrupt manner, I did not mention that one of my dogs died--the next morning after my mother's death. So I didn't even get a chance to mourn her. She was an Alsatian and she was 11. Besides she had had around 6 litters in her time. So she was old and tired and getting a cataract. She too left abruptly. She was just slightly off colour for a day, and then early the next morning she died. This is somewhat what she looked like in her youth. ( I got this picture from wikipedia though). May she have a fun time in doggy heaven.

Well now my Dobe, who has anyway been the family favourite from the beginning, is alone. She really missed her friend for a while, but I think has slowly gotten used to the idea that her friend's not around anymore. She is almost 10 herself, but still acts like a young 'un around us. Hope she is around for longer and that finally when she goes, she'll go like her friend did--quickly and with very little suffering.
Posted by hillgrandmom at 11:16 10 comments: Links to this post