Today, a friend of my eldest son, who can be said to be physically challenged, told me how she had asked him to be the godfather for her daughter. Her little daughter is disabled too, having been a very premature baby. She said she told him, “One day when she is a teenager, she may feel that I, although her mother, will never quite understand how it is to grow up as a physically challenged person. Then I would like to know that she can come to her godfather who can tell her what it’s like and help her to become strong as he is.” She said this and I felt so touched and my eyes filled. Then came memories of how he has struggled over the years and the tears came in earnest. The tears were immediately controlled of course. But this remained in the back of my mind the whole day and so I wanted to do a post on it.

Bless you my son. I am so proud of you. Many times I have had to be tough, to never let even a doubt or a worry creep anywhere into my conscious mind, so that you would feel strong enough to do anything. I’m deeply sorry if I have seemed unsympathetic but it is a thin and difficult line, at any time, to walk between overprotecting a child and disciplining him, so that he can become a strong, positive human being and this becomes ever so much more difficult if your child ids physically challenged. Only the parent of another such child will understand that fully. But, as to living with the disability itself, only another disabled person will ever be able to empathize, because for us physically whole people, we can never quite know how it feels to be in that skin.

I love you and I love you too daughter-in-law dear, for the kind for wife you are to him.

Posted by hillgrandmom at 22:15 5 comments: Links to this post

Every now and then I get this feeling that my blog is so borrrrringgg that maybe I shouldn’t blog anymore. Then I tell myself that it’s supposed to be mainly for myself that I’m blogging. Actually blogging and reading so many different types of blogs has really helped me. Technically I know that one should be interacting in the real world, but for me blogging has helped get over the last bits of my depression. I still have occasional downs, but now I realise they are only downs and not the depths of down that it used to be or the depths of self-loathing (because I used to feel I was the loser to end all losers) that I used to go to. Now I know I may still not be this great winner, but it doesn’t matter all that much at the present time and I’m also better able to choose not to get pulled down by negative statements or random criticisms.

Then the other blog I have, --For the family-- which is a family effort, has been a lot of fun.

So here’s to blogging!

Posted by hillgrandmom at 22:52 9 comments: Links to this post 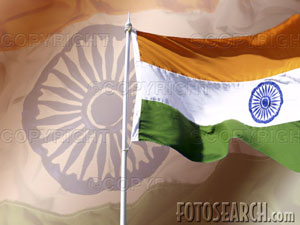 Today is 's Independence Day. We celebrate both the day we became independent of British Rule (59 years today) and the day India actually became a republic, which was only in 1950 (2 ½ years later).

For most of us today Independence Day is just a holiday, the story of which we learnt in our history lessons. But, for people like my mother who were there then, to whom it was time of great excitement, it still means a great deal. In fact she called me this morning after watching the Independence Day Parade at on TV to complain: “Imagine, they were marching to ‘My Bonnie lies over the Ocean’. Even now, after 59 years, why do we have to march to ‘their’ songs? There are so many patriotic songs in our many languages which could be used as marching songs. I want to register a protest! I plan to write to the newspaper.” And I thought, to my husband and me, the idea of watching the parade hadn’t crossed our minds.

My mother has told me several times of what it was like at that time. My parents lived in then. My two elder brothers were there. She says on the excitement was so high. She says my father and she got out with their two sons to join the throngs on the street as it neared , when freedom would be officially declared. She says my father carried the younger of his two sons on his shoulder (who was 3 then) and the older one (6 at that time) walked along. She tells me of the joy and exhilaration in the air. She says they all walked and joined friends and stayed out till early morning. When she used to tell me about it her eyes used to light up, even so many years after.

For my mother and her generation the they had hoped to build didn’t quite work out. But she does concede that a great many positive happenings have taken place and she is definitely proud to be an Indian citizen of Free India.

Posted by hillgrandmom at 15:20 7 comments: Links to this post

1.As I said mangoes and mangosteen (not from the same family at all) occupy top spot. 2. Then come pineapples, no doubt about it.

3. Then I guess come peaches & nectarines (which I ate fresh for the first time when I visited the a long while ago).

4. Fourth are litchis, which we used to eat fresh in , when I was growing up. Here I only get to eat tinned litchis.

After that I can’t really rank them—concord grapes, cherries, custard apples, papayas (with a squeeze of lime &a smattering of sugar), watermelons—try adding a bit of crushed mint, oranges especially loose jacket ones—I think they are called tangerines in the Western world,

William’s pears, apples especially those which are slightly tart & firm, guavas and of course the jackfruit. In fact I think I like almost every fruit I’ve tasted so far-both dried and fresh-except muskmelons maybe & something called tree tomatoes, which we used to get when I was in boarding school in the Nilgiri Hills.

So tell me all of you, what are your favourite fruits?

Posted by hillgrandmom at 14:36 10 comments: Links to this post